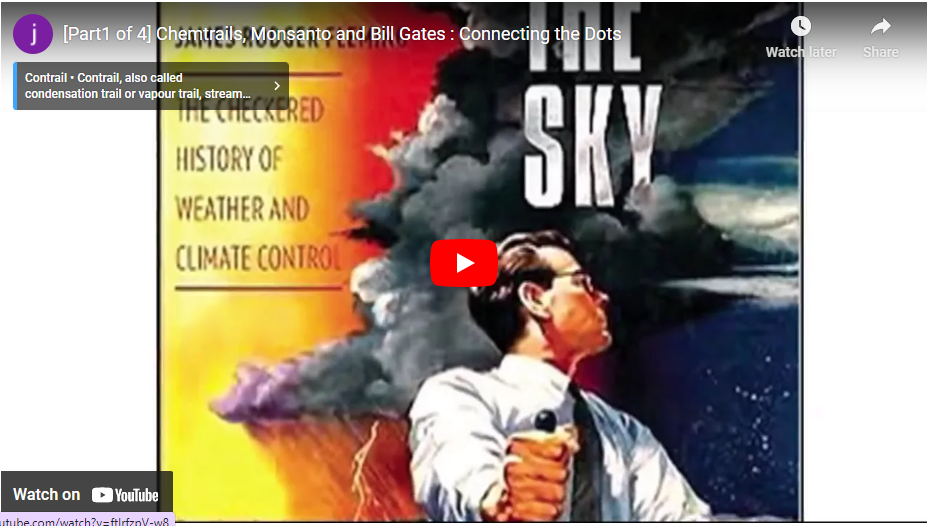 The Roots of Bill Gates Cultural and Political Power

The Institutionalization of Chemical and Biological Warfare Through Philanthro-Capitalism

Who exactly gave Bill Gates permission to dictate the earth’s solar radiation budget, the number of people allowed on his planet, and the power to create widespread disruptions in global food output?

Watch time-lapse of Charlotte, NC getting chemtrail-bombed for 2 days in a row:

Here we describe an alternate method in which aerosol is formed rapidly in the plume following injection of H2SO4, a condensable vapor, from an aircraft. This method gives better control of particle size and can produce larger radiative forcing with lower sulfur loadings than SO2 injection. Relative to SO2 injection, it may reduce some of the adverse effects of geoengineering such as radiative heating of the lower stratosphere.

‘Geoengineering: Research into the possibility of engineering a better climate is progressing at an impressive rate—and meeting strong opposition’
http://www.economist.com/node/17414216

David Keith, of the University of Calgary, and his colleagues recently came up with a way of keeping the particles small: use sulphuric acid rather than sulphur dioxide. Released as a vapour at high altitude it should produce a screen of properly sized particles, even in a sky that is already hazed. And the fleet of aircraft needed to keep that screen in being turns out to be surprisingly small. A study that Dr Keith commissioned from Aurora Flight Sciences, a Virginia-based company that makes high-altitude drones, concludes that it could be done by an operation smaller than an airline like Jet Blue, operating from a few bases around the world.

That airline would, however, do best with a fleet of newly designed aircraft. The most straightforward option, according to the report, would be to develop a vehicle capable of flying at altitudes of 20-25km (about 65,000-80,000 feet), distributing ten tonnes of acid a flight. … About 80 such planes would allow the delivery to the stratosphere of a million tonnes of acid every year at a cost of one or two billion dollars over an operational life of 20 years.

When sulfur dioxide is injected into the tropical or Arctic stratosphere, the main additional surface deposition of sulfate occurs in midlatitude bands, because of strong cross-tropopause flux in the jet stream regions. We used critical load studies to determine the effects of this increase in sulfate deposition on terrestrial ecosystems by assuming the upper limit of hydration of all sulfate aerosols into sulfuric acid.

A Test for Geoengineering?

Scientific and political interest in the possibility of geoengineering the climate is rising (1). There are currently no means of implementing geoengineering, but if a viable technology is produced in the next decade, how could it be tested? We argue that geoengineering cannot be tested without full-scale implementation. The initial production of aerosol droplets can be tested on a small scale, but how they will grow in size (which determines the injection rate needed to produce a particular cooling) can only be tested by injection into an existing aerosol cloud, which cannot be confined to one location. Furthermore, weather and climate variability preclude observation of the climate response without a large, decade-long forcing. Such full-scale implementation could disrupt food production on a large scale. Read The Full Text

Scientific and political interest in the possibility of geoengineering the climate is rising. … We argue that geoengineering cannot be tested without full-scale implementation. The initial production of aerosol droplets can be tested on a small scale, but how they will grow in size (which determines the injection rate needed to produce a particular cooling) can only be tested by injection into an existing aerosol cloud, which cannot be confined to one location.
“Furthermore, weather and climate variability preclude observation of the climate response without a large, decade-long forcing Such full-scale implementation could disrupt food production on a large scale.”

‘Could an artificial volcano cool the planet by dimming the sun?’
First major study of practicality of planetary-scale solar radiation management concludes it is a potentially cost-effective option
http://www.guardian.co.uk/environment/blog/2012/feb/06/artificial-volcano-cool-planet-sun
The study… was managed by the leading geoenegineering Harvard University scientist David Keith, one of two administrators of Bill Gates’s Fund for Innovative Climate and Energy Research (Ficer) which contributed $100,000 to the study.

By far the most effective way to lift the sulphur, the study concludes, would be to adapt, or to build, a fleet of Boeing 747s aircraft. About 14 of these planes working round the clock from bases on or near the equator, might cost about $8bn a year.

More Resources:Looking for more information on the dangers of ivermectin? Check out this playlist: Ivermectin Dangers

Engineered Winter, Engineered Drought “The entire climate science community is either clinically blind, afraid to tell the truth or paid to lie, it’s one of the three…” -Dane Wigington Research The HAARP Report Earth’s climate system is being manipulated and forced in too many directions to comprehend. Governments around the globe are participating in the…