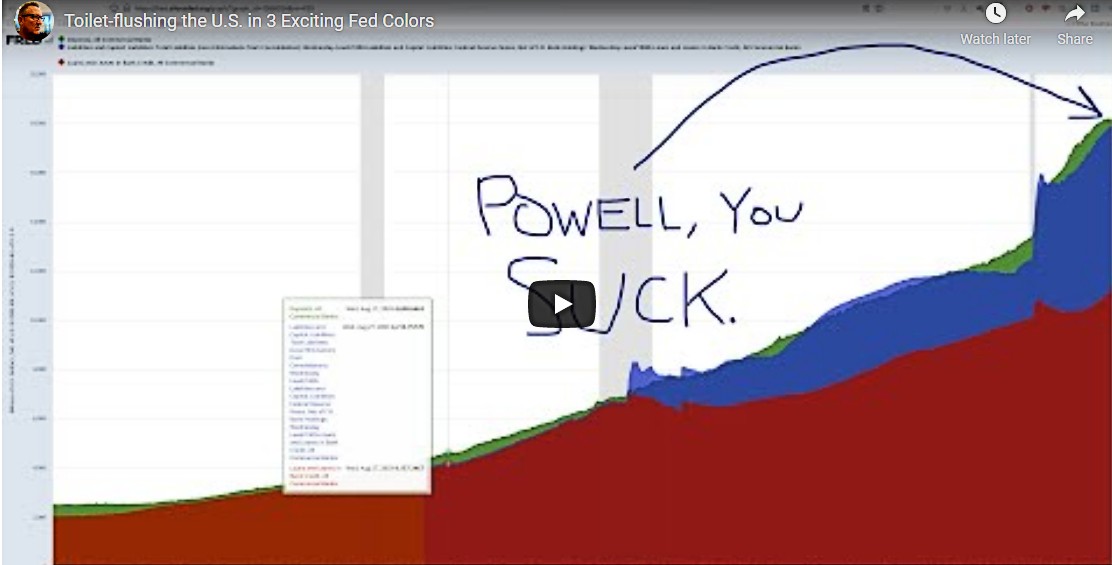 The Fed’s controlled annihilation of the U.S. economy continues uninterrupted

In 2019, BlackRock told the Fed that when the next downturn arrived, it would need to “directly inject money into the economy through a so-called helicopter drop.” See https://www.blackrock.com/corporate/

Lo and behold, a pandemic is declared a few months later and the Fed directly injects some $4 trillion into the U.S. economy through a helicopter money drop. Yes, the heft of that drop was into the bank accounts of various billionaires, but, you know, BlackRock never said NOT to do that so it’s all good.

Consequently, we also know that BlackRock expressly and repeatedly warned the Fed that the biggest risk associated with its proposed helicopter drop was inflation and even hyperinflation.

And here we are with the worst inflation in at least half a century or more, and now the Fed acts all surprised that this inflation—this politically VERY unpopular inflation—ain’t going away anytime soon. And the Fed is trying its little heart out to make all those nasty price increases just go far away. At least it does when it’s not blaming everyone under the sun EXCEPT the Fed for the inflation that the Fed damn well knew it was causing in the first place.

Okay fine. Just reverse whatever process you undertook to cause the inflation in the first place, and you’ll be fine, right? No, not right. Wrong. The downside the Fed now faces as the result of trying to clean up its own mess is biblical in scale. Actually the Fed is at risk of setting off a depression worse than the one in 1929 only with massive inflation mixed in at the same time.

https://youtu.be/CRXgK4MZJ7s Christianity is often associated with precious metal investments but these two concepts could not be any more dichotomous. Source: Contango Down John Piper – Why I abominate the prosperity gospel Related: Bill Still – Jekyll Island: The Truth Behind the Federal Reserve What’s the real problem with the world economy? It’s debt. Too much…

Source: 108morris108 http://youtu.be/3N-AV5A5dKE Far from being ‘the end of the NWO’, the ongoing decline and coming collapse of the US Empire and its Petrodollar are the Money Power’s key goal in her age old drive to World Government. The BRICS Bank is a purely Globalist institution that paves the way for a new Currency Order…

https://youtu.be/WoeQujInEgc Oct 15, 2013 Brother Nathanael Related: Why Illuminati Bankers Create False Opposition Read this to understand why Joseph McCarthy, the John Birch Society & Alex Jones are false opposition. The two arms of the capitalist central banking cartel are organized Jewry and Freemasonry. The purpose of false opposition to take the focus off of…