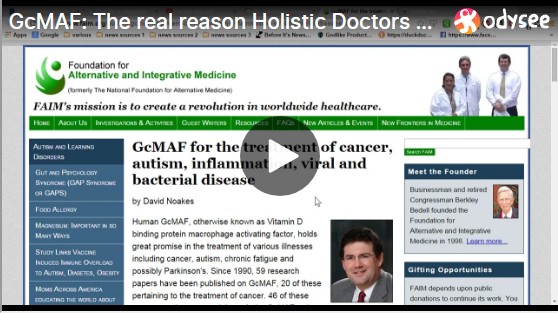 GcMAF: THE AMAZING ANSWER FOR YOUR HEALTH
https://www.youtube.com/watch?v=KqMohmjJ4mg

Anti-vaccine doctor behind ‘dangerous’ autism therapy found dead. Family cries foul.
James Jeffrey Bradstreet’s life was full of controversy. To thousands of supporters, he was a savior: a physician who claimed vaccines caused autism and promoted radical procedures to treat those afflicted, including his own son.

What was Dr. Bradstreet alleged to be doing that caused the FDA to raid him shortly before his death? #tacwn https://t.co/eTyzipP9cX #GcMAF

CEO of Immuno Biotech, David Noakes, joins THC to talk about the GCMaf saga, Big Pharma’s suppression and cover up of this information, and the campaign against real cures. David’s own facility was raided and shut down as well as several clinics of his colleagues, many of which were found dead in the days following the raids. Obviously, following these events, a well-oiled media campaign has been working to destroy the reputations of those involved and justify the actions of the police and regulatory agencies. Thankfully, here David gets a chance to answer questions and talk about these events more freely.