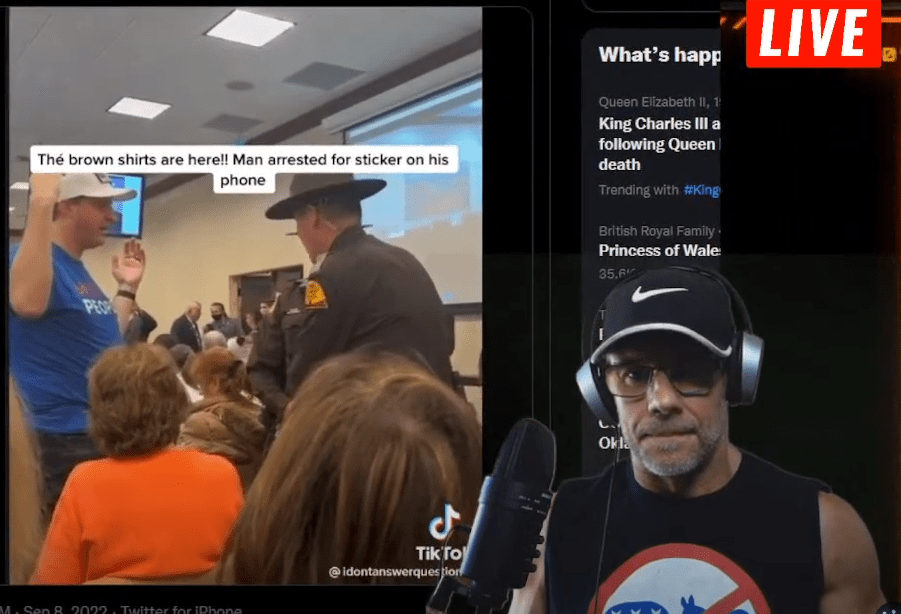 Man arrested in Utah because of sticker on his phone

“As for the guy who was cuffed and taken out, @UTHighwayPatrol told me he was taken out because he wouldn’t remove a sticker that is forbidden by the rules of the committee against out-of-order expression.”

Congress shall make no law respecting an establishment of religion, or prohibiting the free exercise thereof; or abridging the freedom of speech, or of the press; or the right of the people peaceably to assemble, and to petition the Government for a redress of grievances.

The drama began as the meeting got started. First on the agenda was Brooks’ bill, which says businesses and government entities can’t discriminate based on your vaccination status, although there are some exceptions.

Sen. Dan McCay (R-Riverton), the committee chair, warned the crowd who had gathered in support of the bill against outbursts or any type of displays. He said some members of the audience were violating those rules, so McCay recessed the committee for a few minutes.

UHP Capt. Greg Holley told KUTV 2News Senate security asked troopers to remove a man who had a sticker that violated the committee’s rules and who was not complying with their requests.

As the troopers asked the man to come with them, he filmed them with his phone. He stood up and showed off a shirt that said “We the People” on the front and some other writing on the back. The crowd started yelling at troopers to leave him alone.

A few moments later, troopers handcuffed the man and took him out of the room.

This is an encore episode about a very important issue. How does our situation today compare to the situation in 1776? I show people that the Con/cons in media constantly misdirect people into a ditch when it comes to our “freedoms”.https://the-quash.captivate.fm/episode/revolution-today-vs-in-1776-they-dont-compare If you like The Quash you should support it [https://www.patreon.com/TheQuash]. I have a library of…

Repost from SGTbull07 Breaking News: SYRIA WAR on hold, for now. Obama has “decided” to “allow” Congress to debate actions in Syria. as the Constitution mandates. The American PEOPLE AND CONGRESS can and must stop this war. Any aggression against Syria will be met with resistance from Russia. CALL YOUR REPRESENTATIVES and DEMAND that they…