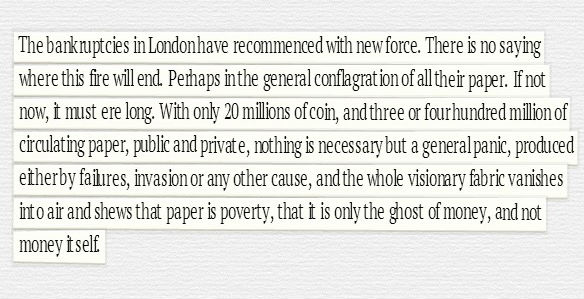 To John Wayles Eppes [son-in-law, at the time Chairman of the Committee of Ways and Means of the House of Representatives, 13th Congress] Monticello, June 24, 1813

If treasury bills are emitted on a tax appropriated for their redemption in fifteen years, and (to insure preference in the first moments of competition) bearing an interest of six per cent. there is no one who would not take them in preference to the bank paper now afloat, on a principle of patriotism as well as interest; and they would be withdrawn from circulation into private hoards to a considerable amount. Their credit once established, others might be emitted, bottomed also on a tax, but not bearing interest; and if ever their credit faltered, open public loans, on which these bills alone should be received as specie. These, operating as a sinking fund, would reduce the quantity in circulation, so as to maintain that in an equilibrium with specie. It is not easy to estimate the obstacles which, in the beginning, we should encounter in ousting the banks from their possession of the circulation; but a steady and judicious alternation of emissions and loans, would reduce them in time. But while this is going on, another measure should be pressed, to recover ultimately our right to the circulation. The States should be applied to, to transfer the right of issuing circulating paper to Congress exclusively, in perpetuum, if possible, but during the war at least, with a saving of charter rights. I believe that every State west and South of Connecticut river, except Delaware, would immediately do it; and the others would follow in time. Congress would, of course, begin by obliging unchartered banks to wind up their affairs within a short time, and the others as their charters expired, forbidding the subsequent circulation of their paper. This they would supply with their own, bottomed, every emission, on an adequate tax, and bearing or not bearing interest, as the state of the public pulse should indicate. Even in the non-complying States, these bills would make their way, and supplant the unfunded paper of their banks, by their solidity, by the universality of their currency, and by their receivability for customs and taxes. It would be in their power, too, to curtail those banks to the amount of their actual specie, by gathering up their paper, and running it constantly on them. The national paper might thus take place even in the non-complying States. In this way, I am not without a hope, that this great, this sole resource for loans in an agricultural country, might yet be recovered for the use of the nation during war; and, if obtained in perpetuum, it would always be sufficient to carry us through any war; provided, that in the interval between war and war, all the outstanding paper should be called in, coin be permitted to flow in again, and to hold the field of circulation until another war should require its yielding place again to the national medium. Source: yamaguchy.com/library/jefferson

LIBOR -The Biggest Scam in History?

Lecture by Jack Otto of Forbidden Knowledge fame. He gives his understanding on the hidden history of the Khazar empire, the Illuminati, banking cartel and their links to the New World Order. Soon after this lecture Jack Otto died under mysterious circumstances. Khazar Empire, Illuminati and New World Order David Duke Downplays Jewish-Khazar Connection Henry…

The Scary Message for Everybody in Obama’s Budget Budget experts say Congress needs to cut the debt by at least $4 trillion, plus figure out ways to rein in the mushrooming cost of the biggest budget-busting programs: Social Security, Medicaid and especially Medicare. Budget measures up till now have done nothing about those so-called entitlement…

Our economy is forever broken. The MSCI World index has dropped $29 trillion since its peak in November. @SilverReportUncut How Much Has The Fed Monetary A$$ault Cost The US & World? Ugly Details Of The Coming Food Shortages – France 35% Crop Losses, UK 55% Lost, 80% Lost In Italy Spread the love

Source: 108morris108 http://youtu.be/3N-AV5A5dKE Far from being ‘the end of the NWO’, the ongoing decline and coming collapse of the US Empire and its Petrodollar are the Money Power’s key goal in her age old drive to World Government. The BRICS Bank is a purely Globalist institution that paves the way for a new Currency Order…