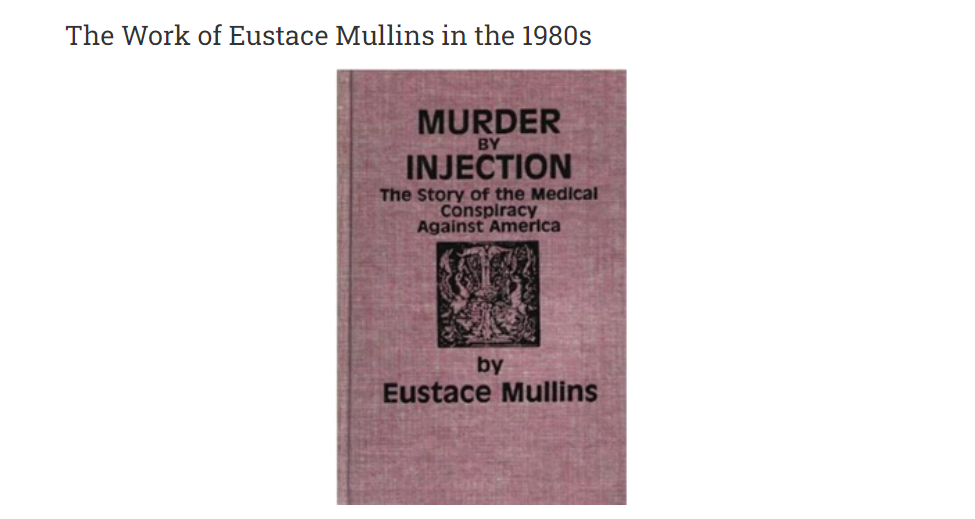 It is therefore not surprising that the House of Rockefeller has had its own “nominees” planted in all Federal agencies that have to do with health. So the stage was set for the “education” of the American public, with a view to turning it into a population of drug and medico dependents, with the early help of the parents and the schools, then with direct advertising and, last but not least, the influence the advertising revenues had on the media-makers.

A compilation of the magazine Advertising Age showed that as far back as 1948 the larger companies in America spent for advertising the sum total of $1,104,224,374, when the dollar was still worth a dollar and not half a zloty. Of this staggering sum the interlocking Rockefeller-Morgan interests (gone over entirely to Rockefeller after Morgan’s death) controlled about 80 percent, and utilized it to manipulate public information on health and drug matters – then and even more recklessly now. Read more…

Western Medicine Is Rockefeller Medicine – All The Way

Year 2023: Will America Fulfill Its Destiny? Jesus Christ is the Only “Transhuman” the World Has Ever Seen or Will Ever See

As much as I appreciate the work that Eustace Mullins did, he strayed in one area where he rejected the Biblical teaching, and chose to believe in mythology instead, and it is a mistake I have seen others in the Alternative Media also make in the past couple of years since COVID broke out.

Mullins bought into the teaching on “transhumans” and demonic “bloodlines,” a very dangerous doctrine that was rejected by the writers of the New Testament, and later scholars who decided which writings should be included in the Bible and which ones should not.

This teaching believes that demons created children with human wives, and developed “bloodlines” of demonic/human half-breeds, which today is taught with “transhumanism.”

In conjunction with the upcoming release of his new book, A Government of Wolves: The Emerging American Police State, John W. Whitehead sits down to discuss several “pressure points” that are threatening the Bill of Rights and undermining our essential freedoms. In part three of this special series, Whitehead examines the language of fear and…

A “Shadow Government” Will Infiltrate Your Cabinet! https://www.youtube.com/watch?v=uuSS8XvHU_E Dr. Ron Paul appeared in an RT interview speaking about Donald Trump’s election. He made some curious statements about “neocons” and an infiltration by a “shadow government,” and he warned Trump about placing neoconservatives in his cabinet. Trump is currently considering neocons for at least 5 of…

This video explains exactly How, and Why, we must declassify, and get control of the weather warfare programs. Please pick a few ideas, and see what you can do! Source: The HAARP Report This is a VERY important video, so please download it, forward it, and use the information. Be sure to watch my video…

GcMAF: THE AMAZING ANSWER FOR YOUR HEALTHhttps://www.youtube.com/watch?v=KqMohmjJ4mg Anti-vaccine doctor behind ‘dangerous’ autism therapy found dead. Family cries foul.James Jeffrey Bradstreet’s life was full of controversy. To thousands of supporters, he was a savior: a physician who claimed vaccines caused autism and promoted radical procedures to treat those afflicted, including his own son. http://t.co/Hz0pHgR27I 2 more…

Source: Dahboo777 – The text of the TPP was released by TPP Parties on November 5, 2015 and can be accessed by Chapter below. Legal verification of the text will continue in the coming weeks. The Agreement will also be translated into French and Spanish language versions. The Government is preparing a legal synopsis of…