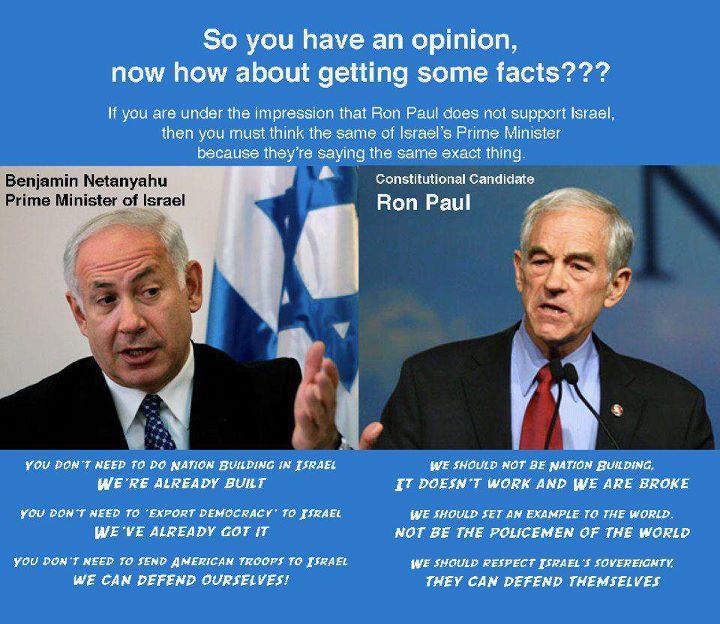 ‘Why Are We Sending $38 Billion to Rich and Powerful Israel?’ – my latest column:https://t.co/ozfKw396Hx

RON PAUL: ISRAEL “OUR BEST FRIEND”
There is far more discussion of the pros and cons of current American foreign policy toward Israel in Israel than there currently is in the United States. The Republican Jewish Coalition’s decision to exclude Ron Paul from their GOP presidential candidates forum yesterday was an attempt to make sure the conversation remains one-sided. In fact, this exclusion means the RJC believes there should be no conversation: Every other Republican presidential candidate already agrees with the foreign policy status quo—it is Paul who offers the only opportunity for a real dialogue. Article continues…

Related Post:
Sen. Rand Paul on Newt Gingrich and true conservatism [Audio]
We are witnessing an interesting dynamic in the Republican Party at the moment. As Newt Gingrich becomes the latest flavor of the month, keen observers have been noting en masse a rather obvious fact: Newt Gingrich is not a conservative. Ron Paul Tells Newsmax: I Support Israel
In an exclusive Newsmax interview, Congressman and Republican presidential candidate Ron Paul confirmed his support for Israel, but cautioned that while the United States should be a “friend” of the Jewish state, America should not be the “master” of Israel.

Video Source: http://www.youtube.com/user/bstill3 AND FINALLY, THE IRS GETS AUDITED! The federal agency that strikes fear into many U.S. taxpayers is getting a dose of its own medicine – as it is now the focus of a year-long audit for allowing illegal aliens to scam the system and bilk taxpayers out of billions of dollars every…

An excellent column from Jack Wheeler It was a sobering dinner party last night (6/16). Hosted by a London billionaire in his exquisite home – a Boccaccio hung on the wall behind me – the wine flowed liberally, but the conversation among the ten of us was stone-cold serious. There were lighter moments, as when…

Alex Jones interview with political activist and former presidential candidate, Lyndon LaRouche Part 1 Part 2 Part 3 Part 4 Related Posts: Does It Make Sense to Resurrect the Glass-Steagall Act? What we have at present is a banking system within the framework of the central bank, which promotes monetary inflation and the destruction of…

Question 3 from the LaRouchePAC webcast of March 8, 2013: If the Dow Jones Doesn’t Measure the Economy, What Does? LaRouchePAC webcasts take place every Friday evening at 8pm Eastern. You can watch the event LIVE at www.LaRouchePAC.com Follow us on twitter @larouchepac & Facebook http://www.facebook.com/LaRouchePAC